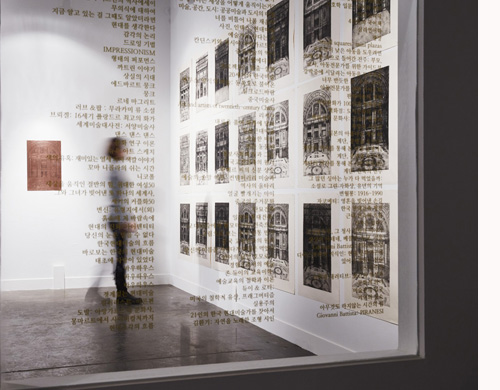 This work started with my childhood memory of Jungangcheong (the former National Museum of Korea and site of Japanese colonial administration) which was demolished in 1995. It was both a physical and aesthetic experience as I walked around the interior of the building with its marvelous floor and curved staircase. In Retrace, I recall this past experience and recreate the now demolished building via copperplate prints of Jungang Hall, which was the center of the Jungangcheong. The copperplate prints show not only interior views of Jungang Hall, but also retrace the origin of the building from European colonial architecture models. Meanwhile, the list of books that I borrowed from my university library is shown on the surface of the outer window of the cube, which means the prints can be seen in conjunction with the list of books through the window. Just as Japan copied the style of colonial architecture from European colonial powers, I tried to trace a similar influence in my own work and juxtapose both in one space. This work shows the process of retracing the origin of my aesthetic sense, and suggests the emergence of a new perspective on my work.