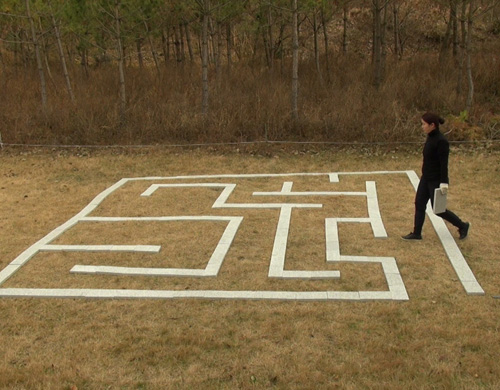 Lost Corner is the title of a solo exhibition that consists of copperplate prints, video and light installations. The works are intended to complement one another and are situated on two levels: ground floor and underground. On the ground floor, the prints show architectural images of Jungangcheong, a former site of Japanese colonial administration. On the lower floor, a light rotates and reflects onto pleated curtains, while in the video Chung places and moves stones one by one in order to make a structure. The recording which accompanies the video features a news reader’s voice which relates part of the history of the building. As the official archive and the artist’s actions are incongruent, an aporia appears between personal memory and official past. Personal memory conflicts with official memory, which prevents a sense of closure from being reached.