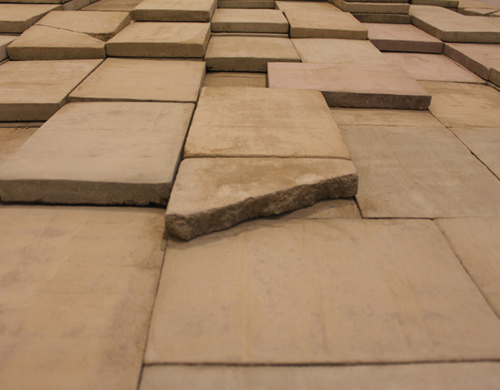 This work is based on my own experience when I attempted to adapt myself to a new environment during a residency program in 2011. Undergoing psychological transitions as a result of processes of conforming, negotiating, and avoiding were inevitable in adapting to a new environment and working side by side with other artists. In the new studio, which used to be a former anglican church, I felt an unknown oppressive burden and tried to get rid of that feeling by making cement blocks. As the cement blocks piled up, the ground level became  higher and higher and the desk kept moving from one location to another. This continuous process not only seemed to be an unwitnessed performance, but alludes to processes of change, labour, work, handcraft and mass production.